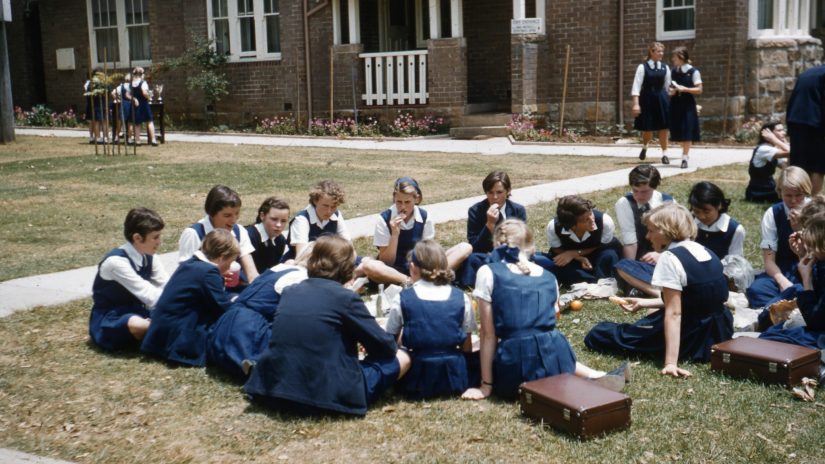 Following the closure of its school at Greenwich in 1942 during World War II, Sydney Church of England Girls’ Grammar School was looking for a new location to reopen a school on the North Shore. Miss Roseby sold Redlands to SCEGGS in 1945 and stayed on until the end of the year. Mrs Isobel Humphery commenced as the first Headmistress of SCEGGS Redlands at the start of 1946.

The school numbers had dropped to around 200 by the end of the War. By the early 1970s, they had risen to 700 as the school offered a revitalised curriculum and programme of sports and co-curricular activities. In order to accommodate the school’s growth, an extensive building programme was commenced in 1950. Many of the main teaching buildings on the Senior campus date from this period, including the Science block (now Roseby Building), Redlands Hall and Stage 1 of the Humphery Building with the Mowll building, built in four stages between 1950 and 1961, demolished in 2017. Several neighbouring cottages were purchased and used variously to house the school administration, Preparatory School (now accommodating Design and Technology) and the staff (the latter cottage being later demolished to make way for the Gymnasium).

Parents’ involvement at Redlands increased during the SCEGGS’ era with the establishment of the Mothers’ Canteen in 1958 (for the purpose of running the canteen and uniform shop) and the Parents’ Association in 1960. Fundraising was key to the building work completed during the 1960s; however the parents and community were to play an equally critical role at Redlands during the 1970s. Following financial problems experienced by the SCEGGS Group in the early 1970s, the Redlands Parents’ Association, by now a strong contingent that had worked closely for years with Mrs Humphery, fought to save Redlands from closure. Upon Mrs Humphery’s retirement at the end of 1973, the Deputy Headmistress, Mrs Helen Foote, became the new Headmistress while three fathers of current students, John Lang, John Roberts and Bruce Adams, rallied the school community and put forward a strategy to save Redlands from being sold.