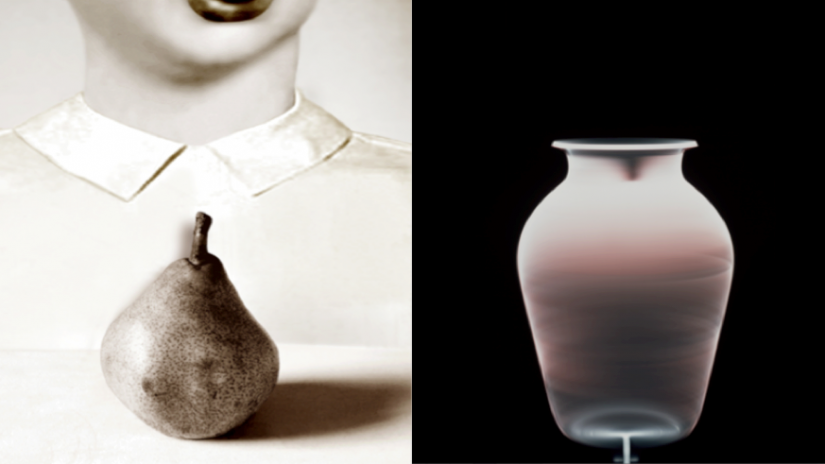 Judges statement: “This year’s Redlands Konica Minolta Art Prize exhibition presents the work of 43 Australian and New Zealand leading contemporary artists showcasing a range of beautifully realised and thought-provoking works that are both ambitious and intimate in scale with subject matter ranging from humorous and ironic to sensitive and reflective, from kitsch to conceptual and personal.

Pat Brassington is one of Australia’s key surrealist artists, revered for her photography and digital media works of art. Her Redlands winning work, Pair Bonding, is a playful visual montage composed of three elements – a face, a shirt, and a bench-top with pear. Brassington’s work challenges the audience’s senses and undermines the ‘authority of photography’.

“The striking imagery seen in Pair Bonding like much of Brassington’s practice reflects her astute understanding of digital media and her mastery of composition. The dream like quality of the image challenges the audience’s perception of reality through the compression of spaces and objects. Brassingtons’s winning work is a very welcome and valuable addition to the Redlands Art Collection”, said Mark Harpley Head of Visual Arts Redlands School.

Pat Brassington’s response to winning the award: “I am thrilled to win this year’s Redlands Art Prize. To be nominated by a peer and to have my work exhibited alongside a stella group of established and emerging artists is a truly unique and valued experience.”

Emerging Sydney based artist and designer, Jack Lanagan Dunbar has created a highly inventive installation with a set of images and sculptures from his upcoming body of work Studies in Light, Movement and Time. The subjects of his photographs, which appear to be luminous ceramic vases, are in fact illusions formed by a clever mechanism of spinning metal rods. These objects do not tangibly exist in three-dimensional space; they are only rendered complete through the use of the photographic apparatus.

Celebrating its 20th anniversary, this annual exhibition and acquisitive art award highlights exciting developments in contemporary art and provides a platform for an artist-selected exhibition that features established artists alongside early-career artists. The exhibition’s guest curator, internationally regarded Sydney-based artist Mikala Dwyer made the selection in line with the Prize’s unique model, which sees the curator nominate established artists, who in turn each choose one emerging artist to create work for the exhibition.  Mikala Dwyer commented: “Together, these artists exhibit the diversity in approach and technique, revealing the broad spectrum of work and ideas being produced in Australia at present.”

Participating artists have no limitations on their choice of media or subject matter and can submit a single recent work to contend for one of two prizes. The main award for established artists is the Redlands Konica Minolta Art Prize, valued at $25,000 and sponsored by Konica Minolta. The Emerging Artist Prize is valued at $10,000 and sponsored by Gleburn Pastoral Company (Brett Whitford).  Most works are available for purchase with the exception of the winning works that are acquired into the permanent art collection of Redlands School, in accordance with the tradition of the Prize.

The 2016 Redlands Konica Minolta Art Prize exhibition will be on public display from 14 March 2016 until 14 May 2016 at the National Art School Gallery (NAS Gallery), located at Forbes Street, Sydney NSW.  The exhibition is free of charge and open to the public Mondays through to Saturdays, 11.00am to 5.00pm (closed Good Friday and Easter Monday). Most works are available for purchase with the exception of the winning works that are acquired into the permanent art collection of Redlands School, in accordance with the tradition of the Prize.