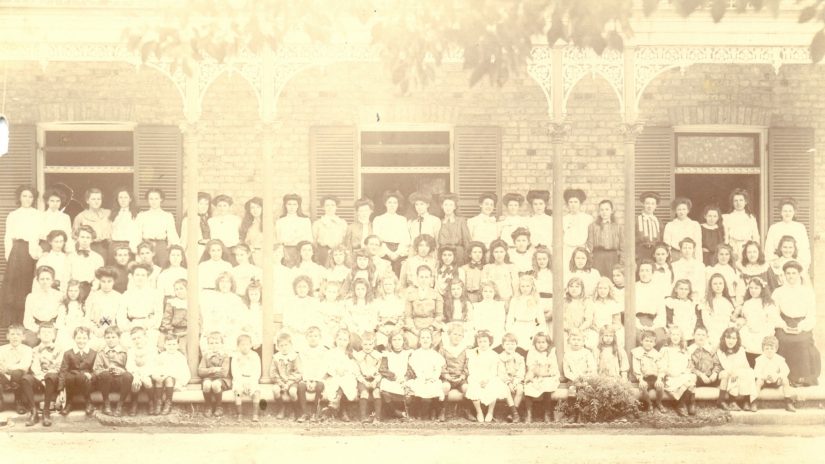 Redlands had its origins in ‘The College for Girls’ established in July 1884 by two Englishwomen, Miss Elizabeth Liggins and Clara Arnold, with just five students. The two co-Principals taught at either end of the Mission Hall in Milson’s Point where the school was first opened, Miss Liggins with the young ones, and Miss Arnold, teaching the older students. The first combined Prize Giving and drama production was held at the end of the school’s first year.

In 1886, the College moved into a new two storey school house built by Miss Liggins on adjacent land at number 31 Fitzroy Street, Milson’s Point. ‘Very young students’ as they were described in an advertisement in the Sydney Morning Herald, had been admitted as early as 1885, forming the genesis of one of Australia’s oldest continuously operating independent kindergartens. The first Director of the Kindergarten, Miss Sarah Anne Brown, was brought out from England by the Principals in 1888. As the College’s reputation quickly spread, enrolment enquiries came from across New South Wales and beyond. Accordingly, boys up to the age of ten were enrolled from 1887 and boarders in 1891.

The first girls from the School to obtain university degrees were Emily Gordon and Nona Dumolo from the Class of 1895, both graduating with Honours from the University of Sydney in 1898. Emily further earned her Masters’ degree in 1902, the first Redlander to be awarded a higher degree whilst Nona, after whom one of the School’s houses is named, became the first headmistress of SCEGGS North Sydney in 1911. She was also the first Redlander to graduate from the Sorbonne in Paris in the mid-1920s. One of their former classmates, Irene (Bayly) Longman, later became the first female Member of Parliament in Queensland.

During the 1890s, before the establishment of the Sydney Kindergarten College, Miss Brown wrote the syllabus and examinations and trained many of the first Kindergarten teachers in Sydney at the College for Girls. Irene Longman was one of her students, along with Maybanke (Wollstoneholme) Anderson, founder of the Kindergarten Union. Maybanke had attended early meetings of the Free Kindergarten Movement the first of which was held in the drawing room of Miss Liggins’ house at either 48 Fitzroy Street or 70 (Upper) Pitt Street, in July 1895, along with other eminent Sydney educationalists.

In September 1899, Miss Liggins and Miss Arnold moved their thriving school to ‘Redlands’, an attractive Victorian mansion set in four acres of land on Military Road, Neutral Bay (now called Cremorne), built by Gerard Phillips, former mayor of North Sydney. The school’s name ‘Redlands’ dates from this year. The move allowed day girls and boarders to be located on the one site and provided ample grounds for games and sport as well as garden parties for social functions and charitable fund raisers. A branch of the Preparatory School remained at Milson’s Point.

The school’s first annual sports carnival was held in 1907, while The Redlanders, the alumni association originally called the Old Girls’ Club was established in 1908. The first school magazine, ‘The Redlander’ was published in 1909.

Main photo: The entire school at Redlands in 1904, twenty years after the school’s establishment. Miss Liggins is at the centre of the photograph, second row; Miss Brown to the left behind her with a child on her lap.