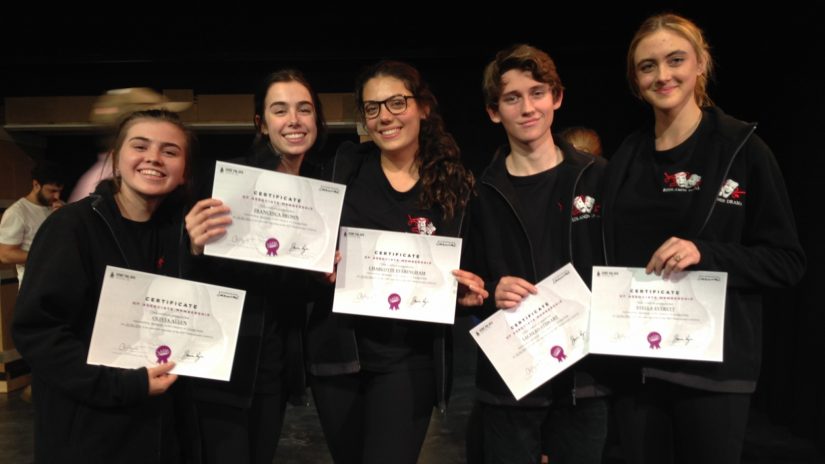 While the 21st century Redlands Drama class is quite different to the Globe Theatre of the 1600s, the Bard’s preeminent works have been the focus of hours of rehearsal, as five Year 11 students master the Bard’s ideas and techniques in preparation for their State Shakespeare Carnival performance.

The School’s Shakespeare Carnival was held as part of the HSC and IB curriculum study with the winning team of Year 11 students having spent the last four months preparing their rendition of Twelfth Night Act 2 Scene 3. After then winning their Regional Final, they now progress to the State Carnival on Sunday 18 June.

Teamwork has been key to their success according to Coordinator of Drama and Theatre Mrs Joy Daley, who has been running the Shakespeare Carnival at Redlands for over ten years.

“At Redlands we’ve had great success historically in the Shakespeare Carnival, with students Harry Knight and Michael Barnett previously having won the competition in years past,” Mrs Daley said.

“Even when the external competition was no longer running, we’ve had our own Redlands Shakespeare Carnival for students.

“We have found our students have developed an incredible passion for Shakespearean performance techniques through their experience, and it is wonderful to see them take on this exceptional material, and make it their own.

“It’s exciting now that the State Carnival is back up and running, and that our Redlands team can take part, giving them an opportunity to work with other students who are as passionate about Shakespeare as they are.

“All the students have been rehearsing and preparing for the State challenge with incredible enthusiasm in the lead up to the competition, and many of our school community will be there to see the students take to the stage.”

“It is wonderful to see the students’ creativity on show, and their success in both their studies and on the stage.

“We wish our Shakespearean performers all the very best.”

The Shakespeare Carnival will take place on Sunday 18 June at the Seymour Centre. Tickets are available at https://www.seymourcentre.com/events/event/the-shakespeare-carnival-2017/