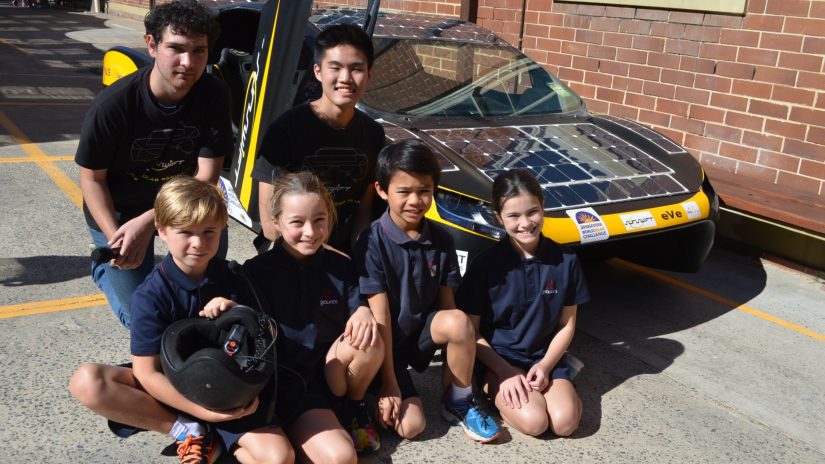 A reflective glinting roof was the first sign that the vehicle pulling into Redlands was one-of-a-kind, and not something the Junior School has ever seen.

eVe is the world’s fastest electric car over 500km, the first road legal solar sports car in Australia, and even though it has standard vehicle amenities like air conditioning, eVe is unlike any other.

The car, built by Sunswift at the University of New South Wales (UNSW), uses the energy gained from 248 solar cells to charge the lithium ion batteries, which in turn powers the motor.

“We were thrilled to have eVe and Sunswift visit Redlands, and our students took great inspiration from everything they learnt and saw,” said Mr Ari Guha, Head of Junior School at Redlands.

“This was a great opportunity for the students to see the applications of science beyond what they learn in a classroom, inspiring them with ideas of what jobs of the future could look like.

“It was also an opportunity for the students to see in action that science is just as much about creativity as traditionally artistic disciplines are.

“This visit was the perfect example of STEAM – science, technology, engineering, the arts and mathematics – epitomised by the multi-disciplined UNSW student team who helped build eVe.

“The team comes from areas including engineering, computer science, commerce, and design, who merge what they learn in classes into practical use, solving problems that may have never been solved before.”

As well as Junior School students, Secondary School’s Science, Innovative Design and Music classes had the opportunity to see the car and engage with the university team.

“In talking to the UNSW team at the end of their time, they were particularly impressed with the level of questioning and thinking of our students, which was great to hear,” said Mr Guha.

“These university students are on the front-line of innovation, experimenting and applying their skills in what is essentially still a realm of the unknown.

“The fact that so many of our students were keen to share their own ideas and thoughts for eVe by the end of the visit was a great sign of the inspiration gained from the visit.”