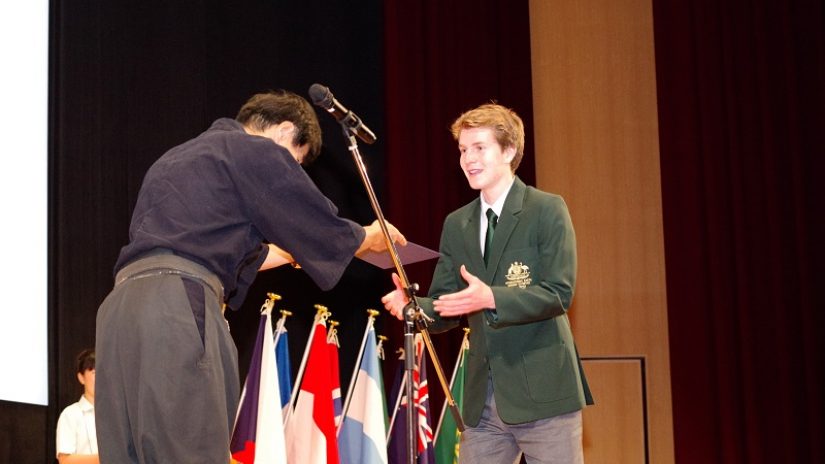 The second Redlands School Captain to return home from an Olympic experience has done so with a Bronze medal and a wealth of experience.

Jeffrey Brown was part of the four-person Australian team attending the International Earth Science Olympiad, in Mie, Japan – and Redlands is proud to announce that he was awarded a Bronze medal.

From an initial pool of more than 150,000 students who sat qualifying exams, Jeffrey and his Redlands Co-Captain Zoe Thompson, attended the Olympiad Summer School in Canberra.

In July, Jeffrey was selected as part of the Australian Earth Science team, and Zoe the Biology team to represent Australia in these International Olympiads.

The medal was not Jeffrey’s only success, he was also voted Most Popular Participant, an award for international empathy and collaboration voted by the other participants, and he was also one of the speakers selected to present the Mie Declaration during the Closing Ceremony.

“Jeffrey’s achievements at the Earth Science Olympiad proved his depth of knowledge, his strength of character and his confident and outgoing, yet humble, personality,” said Redlands Principal, Dr Peter Lennox.

“While this Olympiad may not have had the same TV coverage as the 2016 Rio Olympic Games, the students who attended faced an extreme test, and we are very proud of Jeffrey’s success.

“This was a truly elite environment and an unforgettable experience. The students had the opportunity to collaborate with the best young science minds from countries all across the world.

“Redlands is thrilled that Jeffrey represented his school and country so excellently, and that he achieved at such a high level on this global stage.

“We are very excited to see what Jeffrey and Zoe will each achieve next, and wish them and the entire Year 12 cohort the all the best in their final exams,” said Dr Lennox.